Muharram, also known as Muharram-ul-Haram, is the first month of the Hijri calendar and thus marks the beginning of the Islamic year. It is the only month which Allah's name has been attached to - the Prophet Muhammad (saw) referred to it as 'the Sacred Month of Allah' - and is thus a highly blessed month.

It is one of the four sacred months, and its special importance is indicated by its name. The word 'Muharram' literally means 'forbidden' - i.e. it is so sacred that certain actions become forbidden during it, as they would violate its sanctity. Both the month of the Muharram and Allah's House (Al-Masjid Al-Haram) derive their names from the same Arabic root word; both are sacred spaces in which every deed, good or bad, weighs heavier on the scales.

Why is Muharram so special?

'Indeed, the number of months with Allah is twelve [lunar] months in the register of Allah [from] the day He created the heavens and the earth; of these, four are sacred. That is the correct religion, so do not wrong yourselves during them…’ (Qur’an, 9:36)

Therefore, Muharram is special simply because Allah has chosen it to be so. He commands us not to 'wrong ourselves' during this sacred month, which essentially means to ensure we have pure intentions and righteous behaviour and don't fall into sin.

What are the four sacred months?

Rajab, meanwhile, is the seventh month of the Hijri calendar and stands alone as a sacred month. Historically, this was to allow people to perform 'Umrah in Rajab if they wanted to.

What are the benefits of Muharram?

Although many of us understand the importance of the month of Ramadan, we can often neglect the sacred months. However, they offer us a wealth of opportunities to seek the mercy and favour of Allah, the likes of which cannot be found at any other time of the year. They have been specifically selected by Allah Himself as the best times to draw closer to Him.

As mentioned before, our deeds carry more weight during Muharram, just as they carry more weight in the Ka'bah and its surroundings. Thus, there is an opportunity to gain more reward every day; but also the danger of gaining more sins with our bad deeds. This means we should be extra-vigilant when it comes to how we act, whether in our relationships, at work, in our worship, in our time management, or even how we take care of our health. With the right intention, every single action can become an opportunity for reward!

We've put together a quick list of easy ways to take advantage of the benefits of Muharram:

These actions aren't specific to Muharram, but they are highly recommended and it makes sense to increase them during this blessed month!

What are some recommended actions or Sunnah during Muharram?

It is highly recommended to fast as much as possible during Muharram (though fasting the whole month is reserved for Ramadan only). The Messenger of Allah (saw) said, 'The best fasting after Ramadan is the Sacred Month of Allah (Muharram)...' (Muslim)

In fact, the sanctity of Muharram was so established that even the Quraysh in the days of Jahiliyah (ignorance) used to fast on certain days. One such day is the Day of ‘Ashura (the 10th of Muharram), which celebrates Allah (swt) freeing Prophet Musa (as) and his people from the bonds of Pharaoh:

The Messenger of Allah (saw) said that fasting on the day of ‘Ashura , ‘expiates the minor sins of the past year’ (Muslim). It is, therefore, highly recommended to fast on this day.

The Prophet (saw) also advised us to also fast on the 9th and/or 11th of Muharram in order to differentiate between his Ummah and the People of the Book and as we know, following his Sunnah contains immense blessing. We have another blog post about the Day of 'Ashura if you want to learn more this amazing day, from its history to its numerous blessings.

Should I give my Zakat during Muharram?

It is not specifically recommended to give Zakat during Muharram. However, the increased reward available for honouring the times of the year favoured by Allah is one of the reasons why many Muslims around the world choose to give their Zakat in Muharram or Ramadan.

If you prefer to spread out your Zakat payments over the whole year, you can estimate what your Zakat should be using our Zakat calculator and divide it by twelve. Sponsoring an orphan is the perfect way to spread out these monthly payments; it costs just 98p a day and completely transforms a child's life!

Most of our projects at Muslim Hands are Zakat-eligible, from our emergency appeals and campaigns to our long-term work in eradicating poverty. You can also give to our Zakat Fund if you can't decide which project to contribute towards, and our experts will allocate it to the communities who need it most.

Check out our other articles about making New Year's Resolutions and the benefits of 'Ashura to maximise your reward this Muharram!

Here are ways you can help 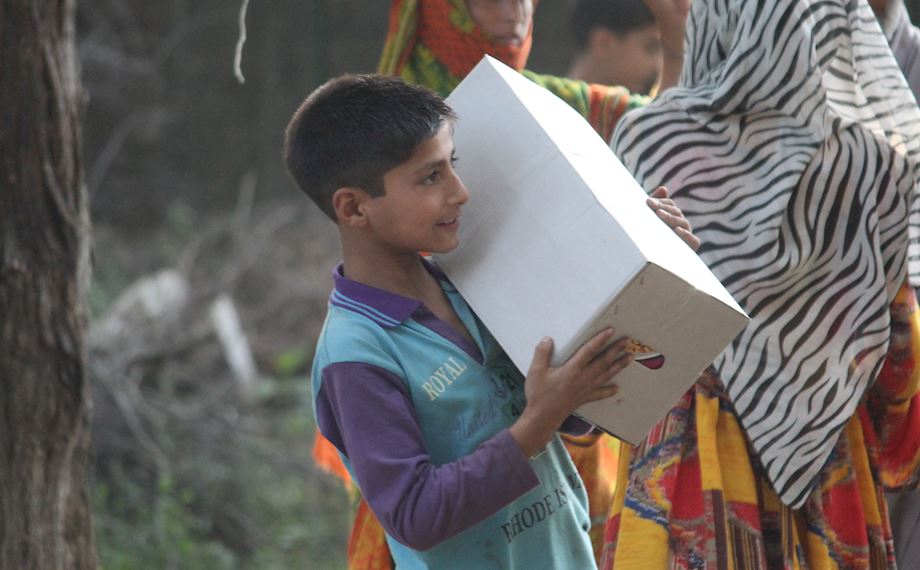 Previous Article What is Sadaqah Jariyah?

Next Article ‘The only mistake they think I’ve made is that I’m Muslim’: Life in the Rohingya Camps

Qurbani 2020: Everything You Need To Know

Visiting Yemen Today: ‘I always leave feeling I could do more’.

The Benefits of Dhul Qa'dah, The Sacred Month

Press Release: Water for One Million