Alhamdulillah, we are honoured to present you with our NEW digital hadith collection about Masjid Al-Aqsa and the people of Jerusalem.

It includes over 40 hadith in Arabic and English, as well as commentary in the footnotes. To get your FREE digital copy, click this link! (You will need to enter your email address to access it).

Here are five of the most interesting, thought-provoking and emotional ahadith in the collection:

Hadith 1: It is the second oldest masjid

On the authority of Abu Dharr (ra) who said, 'I said, "O Messenger of Allah, which masjid was built first?"

He said, "The Sacred Masjid (al-Masjid al-Haram in Makkah)".

He said, "And then the Furthest Masjid (al-Masjid al-Aqsa in al-Quds)".

I said, "What was the period between them?"

He said, "Forty (years)". He then said, "Wherever the time for the prayer comes upon you, then pray, for the earth is a place of prostration (masjid) for you"'. [Bukhari]

The above conversation reveals a little-known historical fact: Masjid Al-Haram and Masjid Al-Aqsa are the two oldest masjids on earth. They are also the only two masjids named in the Qur'an; once, Allah (swt) even refers to them in the same ayah, saying: 'Glory be to the One Who took His servant by night from al-Masjid al-Haram to al-Masjid al-Aqsa, whose surroundings We have blessed…' [The Noble Qur'an, 17:1]

So how old are the two oldest Houses of Allah in the world?

Many Muslims associate the building of the Ka'bah with Ibrahim (as). This is because during the era of Nuh (as), the Great Flood destroyed the entirety of Masjid Al-Haram except the foundations of the Ka'bah, and it was rebuilt by Prophets Ibrahim (as) and Isma'il (as).

However, the original Ka'bah existed before humanity did! According to Imam al-Baghawi, the Ka'bah was first built by angels, around 2,000 years before Adam (as) was sent to earth. Later, Adam (as) was ordered to lay the foundations of the Ka'bah once more. According to Imam al-Razi, this was because he complained to Allah of his loneliness on Earth, since longing for the divine is part of human nature.

'Behold, the first House (of Prayer) established for mankind is the one at Bakkah: it is full of blessing and a centre of guidance for the whole world'. [The Noble Qur'an, 3:96]

Since Masjid Al-Aqsa was built only 40 years after the Ka'bah, it is safe to assume that it has existed since the earliest years of humankind, and perhaps even before that! SubhanAllah, it is an incredibly ancient site!

Hadith 6: The last Companion to face both Qiblahs

Anas (ra) said, 'No one remains of those who prayed facing both Qiblahs (al-Quds and Makkah) except me'. [Bukhari]

SubhanAllah, we really cannot imagine the emotions of Anas (ra) when he said these words. He had experienced a phenomenon which no one alive could remember - the changing of the Qiblah from Masjid Al-Aqsa to the Ka'bah. This was when Allah sent down the following verse:

Anas ibn Malik (ra) is believed to be the last Companion to pass away - or at least the last living Companion in Basrah. The strongest opinion is that he passed away aged 103 and was buried with a small staff, which belonged to the Messenger of Allah (saw).

Anas' (ra) hadith about being the only living person to have faced two Qiblahs is particularly moving. No doubt, there were many more things Anas (ra) remembered alone in his last days. He had been one of the closest people to the best of creation, for he had served the Prophet (saw) for ten years in Madinah, since he was ten years old.

Hadith 12: Better than the world and everything in it

The Messenger of Allah (saw) said, 'What an amazing place of worship it is! Surely, there will soon come a time when, for a man to have land equivalent to his horse's rope - from which he can see Bait al-Maqdis - will be better for him than the whole world!' (The narrator said, 'or he [saw] said, "Better for him than the world and everything in it!"') [Hakim]

80% of the Muslims who live in Jerusalem are impoverished, and they rely on us for Zakat and Sadaqah. Despite all the difficulties, our partner on the ground spoke to a man who said, 'I will never leave this house', referring to the small, overcrowded room where he lives with his whole family. 'I wake up and see Masjid Al-Aqsa every day. There are so many people who want that. There must be a reason Allah put me here'.

He lives in poverty, he is unable to work due to being disabled and he struggles to put food on the table, and yet this noble man considers himself fortunate to be able to see Masjid Al-Aqsa from his home. And he is delighted to welcome Muslims who travel from around the world to see the masjid.

We pray Allah eases his burdens and blesses all our brothers and sisters who live near Masjid Al-Aqsa, and that He grants them the highest reward in His Jannah, ameen!

Hadith 16: Gaining the reward of praying in Masjid Al-Aqsa

The Prophet (saw) said, 'It is the land of Resurrection and Congregation. Visit it and pray in it. For indeed, prayer in it is like a thousand prayers in other than it'.

He was asked, 'If one cannot visit it, what should we do?'

This is definitely a hadith we cannot neglect, as it shows the wisdom of the Prophet (saw) and the generosity of Allah! Obviously, not all Muslims will be able to pray in Masjid Al-Aqsa, not just because of the difficulties and cost of travel, but also because of various conflicts that have occurred around it throughout history. However, we have been granted a beautiful way to gain the same reward as praying there - sending some oil to light its lamps!

The modern equivalent of this is, of course, contributing to the cost of its electric lighting. Over the years, you have gifted light to the exterior areas of Al-Aqsa, as well as the inside of the Qibali Masjid Grand Prayer Hall.

And now, alhamdulillah, we are honoured to invite you to illuminate the Dome of the Rock Masjid - an incredible opportunity to gain the reward of 1,000 prayers!

Hadith 20: The du'a of Prophet Sulaiman (as)

The Prophet (saw) said, 'When Sulaiman bin Dawud [as] finished building Bait al-Maqdis, he asked Allah for three things: judgement that was in harmony with His judgement, a dominion that no one would have after him, and that no one should come to this masjid, intending only to pray in it, except that he would emerge free of sin, like the day his mother gave birth to him'.

Then the Prophet (saw) said, 'As for (the first) two (supplications), they were granted, and I hope that the third was also granted'. [Ibn Majah]

Many of us are aware that Ibrahim (as) and Isma'il (as) made many du'as while building the Ka'bah, including praying for the security and prosperity of the people of Makkah. But the du'a of Sulaiman (as) at Masjid Al-Aqsa is far less well-known, although it is highly significant.

This is something we usually associate with Hajj to the Ka'bah, but Allah has also blessed his second-oldest House with this virtue.

And of course, by illuminating Masjid Al-Aqsa, we can also gain forgiveness for our sins, since it is an action equivalent to praying there. That makes this Sadaqah doubly unmissable!

Yes, you read that right! This was one of the miracles which occurred following Al-Isra' wal-Mi'raj:

The Prophet (saw) said, 'When the Quraish disbelieved me (about the miraculous Night Journey), I stood up in al-Hijr and Allah displayed Bait al-Maqdis before me, and I started to inform them about its signs while looking at it'. [Bukhari]

As the Prophet (saw) was standing in al-Hijr, the unroofed, semi-circular portion of the Ka'bah, the Quraish were questioning him about Masjid Al-Aqsa and mocking his claim that he (saw) had travelled there and back in less than one night.

In a longer hadith, the Prophet (saw) said, 'I was asked about things pertaining to Bait al-Maqdis which I could not preserve (in my mind). I was very much vexed, so vexed as I had never been before. Then Allah raised it (Al-Aqsa) before my eyes. I looked towards it. They didn't ask me anything (about it) except that I gave them information about it'. [Muslim]

The context of this miracle is especially important. Al-Isra' wal-Mi'raj took place soon after the Year of Sorrow, when the Prophet (saw) lost his beloved wife Khadijah (ra), as well as his uncle Abu Talib, his protector and ally. He had also been rejected by the people of Ta'if in the most cruel way, for they sent their children to stone him in the streets until he left the city.

Yet, when he (saw) returned from this wondrous journey, the Quraish continued to mock him and disbelieve him. They also ridiculed the Muslims - whom they had been persecuting for years - for following a man who would make such an absurd claim. How could he travel to Masjid Al-Aqsa in less than one night?

The Prophet (saw) had naturally forgotten some of the details of Masjid Al-Aqsa that they were questioning him about, and he was vexed that he couldn't respond to them. So Allah 'transported' Masjid Al-Aqsa in front of the Prophet (saw), giving him the ability to answer all of their questions and prove that this miracle had really occurred.

The Messenger of Allah (saw) said, 'The chosen land of Allah is Shaam and in it are His chosen people and servants. A group from my nation will certainly enter Paradise without any reckoning or punishment'. [Tabarani]

Allah has selected His best servants to live in Shaam, and we know from other hadiths that His angels spread their wings over Shaam, and the Prophet (saw) encouraged his Companions to adhere to Shaam. Therefore, we are honoured not just to serve Masjid Al-Aqsa, but also support its people. Whether this is the people of Jerusalem, Gaza, or Syria, we cannot underestimate the reward of helping them and the power of their du'as.

We hope this article was helpful to you! Click this link to receive your FREE copy of the digital hadith collection! 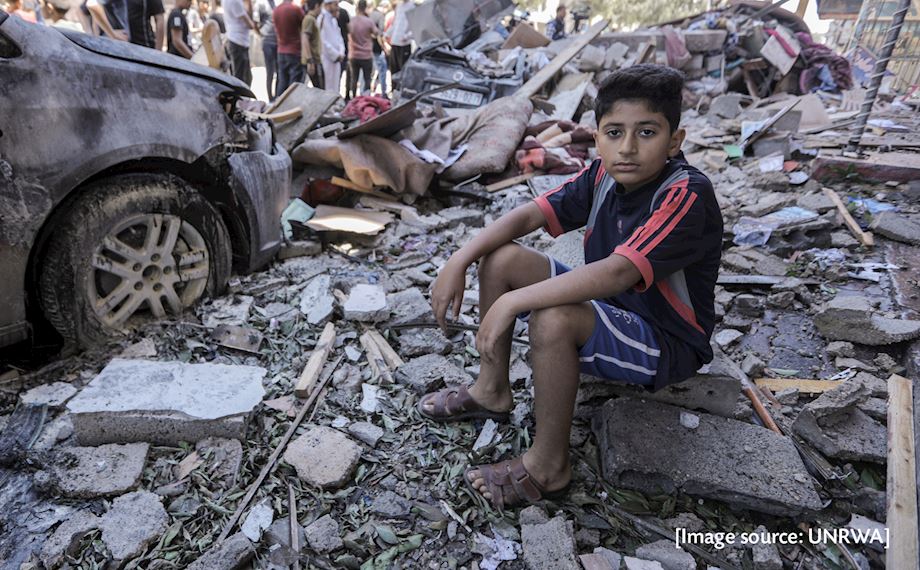 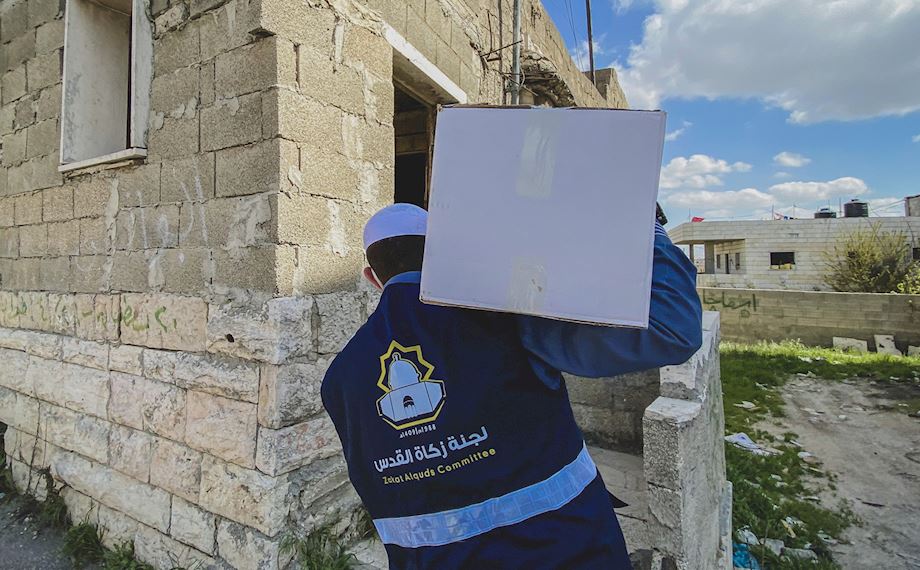 How You've Helped So Far

Previous Article Build a Home for a Syrian Family!