The Messenger of Allah (saw) was asked, 'Which charity is best?' He replied, '(Providing) water'. [Abu Dawud]

The Prophet (saw) said, 'The best of men are the men of Yemen, belief is Yemeni, and I am Yemeni'. [Ahmad]

SubhanAllah, given these two powerful ahadith, it's no wonder your generosity towards our water projects in Yemen has been overwhelming!

Already a water-scarce region, the six-year conflict in Yemen has severely impacted the country’s water infrastructure, leaving 18 million people in urgent need of WASH assistance [UN]. With your support, our team has been tackling this massive water crisis - and we've achieved far more than we ever thought possible. Your donations sky-rocketed during Ramadan 2020 and, over the last year, they have kept pouring in, allowing our team to launch multiple projects across the water-scarce country.

After Ramadan 2020, we were aiming to supply 75,000 more Yemenis with safe drinking water; by Ramadan 2021, we had massively increased our aim to 2 million people - all because your Zakat and Sadaqah kept flooding in for these blessed people!

Abdul Rahman Hussain, the Director of our Yemen Office, once said, 'I remember seeing a man walk 27km through the desert with a bucket in his hand hoping to fill it with water from a well. I went with him and, when we got to the well, it wasn’t working. Simply because of a malfunctioning well, the man would leave with nothing'.

Your compassion means the world to tens of thousands of people just like that man. You are bringing clean drinking water straight to their doorsteps, round-the-clock, so they can cook food for their children, wash dishes and clothes, take care of their livestock, grow crops for selling and quench their thirst in the heat of summer. Your donations are literally a lifeline and we cannot thank you enough for alleviating the desperate need in Yemen.

Without further ado, here are just five of the water projects you've helped us launch in Yemen over the last year!

Al-Habilain is located in the Lahj Governorate. It has experienced a massive influx of IDPs due to the ongoing conflict. In 2004, there were less than 45,000 people living in Al-Habilain - today, they number around 150,000.

The people in this area were suffering due to lack of access to safe water. Before our intervention, they were walking long distances to collect water from unprotected and potentially contaminated sources. This is particularly appalling given the spread of waterborne diseases such as cholera in Yemen during the last few years.

Alhamdulillah, in November 2020, we completed rehabilitating the existing well in Al-Habilain to solve this problem. This included installing a solar-powered pump which supplies 5 litres of water per second, as well as providing a 5,000 litre storage tank from which water could be collected at five different points.

SubhanAllah, this solar-powered water well is now providing around 100,000 litres of water every single day, right on the doorsteps of families who had been suffering.

It is benefitting 50,000 people, including over 17,000 IDPs who had fled from the conflict in the nearby city of Al-Dhalee. In sha Allah, it will continue to provide water for generations to come, making it an incredible Sadaqah Jariyah.

Protecting children in Al-Junaid from exhaustion and sickness

Al-Junaid is a village in the Ta'iz Governorate which suffers from a severe shortage of water. There are existing wells in the region where the water is drawn by a bucket, but it is difficult and tiring to collect this water. Many children were missing school due to walking long distances to fetch water for their households.

Bashar is one of the children who was suffering due to lack of access to water.

Bashar's father is living in a different governorate in order to earn a living and provide for his family. So this little boy had to leave school to help his mother, elderly grandmother and younger brother.

Bashar is in charge of collecting water, and he used to spend most of his time walking between wells in search of water, queuing up to collect the water and then transporting it across the rugged, mountainous roads. He told our team that he was constantly exhausted and he often had to queue for hours just to collect a bucket of water.

He used to dream of water being closer to his house, so he could go to school instead of walking from one well to another all day.

Your Zakat and Sadaqah were the answer to Bashar's du'as. Alhamdulillah, with your support, we rehabilitated this well to supply clean, round-the-clock water to 2,000 people!

You have lifted the burden from this little boy's shoulders; to his relief, fetching water has become much quicker and easier.

Our team installed a solar-powered pump and motor and other equipment within the well (such as pipes). They also built a 4m² room around the well to protect it from damage, as well as a 5,000-litre storage tank, a water distribution point with five faucets and an aquarium for livestock to drink at the well.

None of this would have been possible without your donations. Now, the children of Al-Junaid, Shabaa, Al-Qahfa and Nafadan will all have clean water for generations to come, alhamdulillah!

Jazakum-Allahu khairan for supporting children like Bashar, protecting them from exhaustion and waterborne illnesses.

Expanding the reach of an existing well in Wadi Shaab

The water infrastructure in Yemen is outdated and, in many areas, existing wells are not effective in reaching all the surrounding villages. Rehabilitating these wells would increase both the water production and the number of people who are benefitting from each well.

This is why our team decided to carry out this type of intervention in Shaab Al-Aelaa, located above Wadi Shaab (the Valley of Shaab).

Wadi Shaab is located in Lahj. There is an existing well, but it is only accessible by people in the valley and cannot reach the nine villages located on higher ground. They are therefore experiencing a shortage of clean water.

This project involves installing 1,100 metres' worth of a new pipe network to connect these nine villages to the existing well. Moreover, we are improving the well by installing a solar-powered water pump and motor, to ensure round-the-clock access to water. The increased water availability will also improve agriculture in the region.

Thanks to a generous donor, around 8,500 people will benefit from this project, including over 3,000 children! Children are especially vulnerable to the illnesses caused by unsafe water, making this a life-saving Sadaqah Jariyah project, alhamdulillah.

You can watch a clip of our team working on the water well below:

Please get in touch with our Major Giving team if you would like to fund your own water project in Yemen.

Installing solar systems in all our water projects in Yemen not only ensures they are sustainable, it also means they can still function amid the frequent power outages in the war-torn region. These power outages exacerbate water shortages, making it even more difficult for people to easily access water.

An example would be the Al-Kadeema village in Lahj. Although there are two existing wells in this village, frequent power outages combined with weaknesses in the water network mean that residents still don't have enough water to drink. Moreover, they are also suffering from lack of water for their agriculture and livestock, despite this being their main source of income.

Thanks to generous donors like yourselves, our team are currently rehabilitating one of the existing wells, as there is plenty of space next to it to install a solar-powered unit. This will allow it to produce 65m³ of safe water per day, regardless of power outages.

This project is still ongoing - but when it is completed, 4,300 people will benefit, including over 2,000 children! You can watch a message from our team on the ground below:

Please get in touch with our Major Giving team if you would like to fund your own water project in Yemen.

Alhamdulillah, all of the projects mentioned above will provide water to thousands of people for years to come, in sha Allah! But our project in Aden is our biggest water project EVER - improving the water supply for 1.7 million people, subhanAllah!

The water infrastructure in Aden is over 50 years old, dating back to the British colonial era. It was outdated and filled with problems even before the conflict began back in 2015, and the situation has only worsened over the last six years. Currently, households in Aden are receiving piped water for only 2-4 hours every three days. This is absolutely appalling and has led to many families resorting to unsafe water sources.

We are rehabilitating the water infrastructure in Aden to improve water production by 10%, improving the water supply for 1.7 million people, alhamdulillah. Alhamdulillah, we started fundraising for the Aden water project in Ramadan 2021 and you have already reached the target of £446,000!

Your donations are helping to us construct new wells, install 4,000 metres of new electric network, provide new pipes and submersible water pumps and more. (Read more about this massive project and how it will tackle the shocking water crisis in Aden).

Your continuous donations to the Yemen Water Fund allow our teams to keep planning water projects in Yemen to help even more people. In sha Allah, once the Aden project is completed, we hope to launch similar interventions in other Yemeni cities, providing water for life across this blessed land.

We have many well rehabilitation projects ongoing across Yemen, alhamdulillah!

For example, we are rehabilitating water infrastructure in the Al-Rawda and Arak district in Ma'rib. Torrential floods at the Ma'rib Dam recently damaged this already outdated infrastructure, as well as homes in three IDP camps, leaving families in a state of emergency.

Our team are rebuilding the damaged infrastructure as well as installing a new pipe network and a solar-powered motor to improve water supply. This will initially provide 7,000 people with round-the-clock water, from both the displaced and host communities.

On behalf of our Yemen team and all the beneficiaries, we'd like to say a massive Jazakum-Allahu khairan to you for all of your donations so far! You have helped more people than we could have ever imagined and we pray Allah (swt) rewards you generously, amin!

We urge you to continue giving your Zakat and Sadaqah to the Yemen Water Fund. You will not only be supporting several ongoing projects, you will also be helping us launch even more life-saving water projects across the country. Every donation will provide clean water to the people of the Prophet (saw), the first to drink of the Basin, so blessed that they are mentioned in the Qur'an.

Don't forget to share this amazing cause with family and friends! As the Prophet (saw) said, ‘Whoever guides someone to goodness will have a reward like one who did it’. [Muslim] 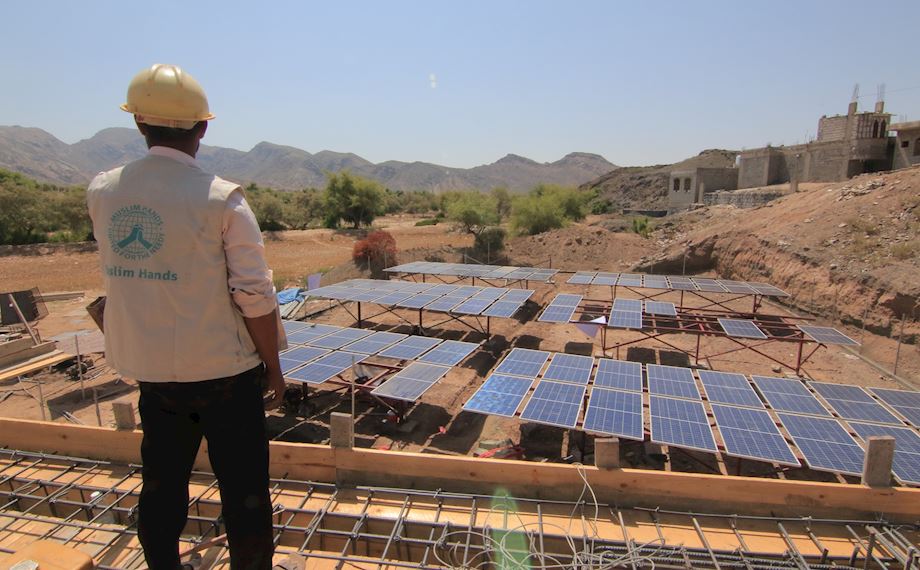 Previous Article 10 Ways You Can Support Palestine and Gaza

Next Article Giving Qurbani in 2021: Everything You Need To Know